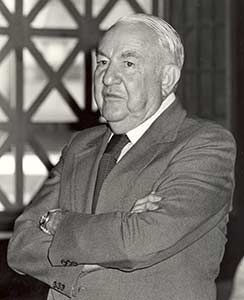 Born on September 27, 1896, Senator Sam Ervin liked to portray himself an an “simple country lawyer” from Burke County who stood up for an individual’s rights, civil liberties, and the U.S. Constitution in his various roles as legislator, jurist, and in the U.S. House of Representatives and Senate. At the same time, his civil rights record is spotty, as he felt government had no business in legislating equality of the races. Historian Karl Campbell refers to Ervin as the “Last of the Founding Fathers” due to his intimate knowledge of the document that is the foundation of the U.S. government combined with his stances that the federal government should take a hands-off approach to some issues due to the Constitution.

While he may have been simple in his ways (and he never lost touch with his Burke County roots), he was a participant in some major events during his life and his contributions in these events have left a lasting impact on both the Tar Heel State and the United States. Specifically, he played a role in fighting a world war and his public service life as a legislator encompassed the evolution controversy in North Carolina in the 1920s, McCarthyism in the 1950s, and Watergate in the 1970s.

Here is a collection of information and links concerning these events. 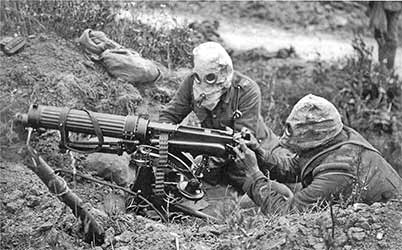 Ervin was one of 86,457 soldiers from North Carolina sent to Europe to fight during World War I. The state lost 828 men killed and 3,655 wounded in battle. Sam was one of the wounded, being injured during the war and receiving a Purple Heart for his service. That medal is on display at the Sam Ervin Museum & Library.

Ervin entered the war as a lieutenant as part of the First Division in 1917, just as he completed his studies at UNC Chapel Hill. He saw action at Cantigny and Soissons. He commanded a unit during the war, but resigned his commission so that he could return to the front and to combat. He returned to the U.S. in 1919 and entered Harvard Law School, graduating in 1922 and beginning his years of public service. 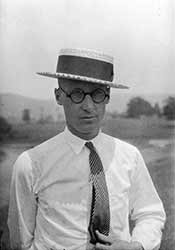 Shortly after graduation from Harvard in 1922, Ervin was elected to represent Burke County in the North Carolina General Assembly, where he served 3 terms. In 1925, Representative D. Scott Poole introduced a bill to prohibit the teaching of evolution in state-sponsored schools. This took place during the famous Scopes Monkey Trial where Tennessee teacher John Scopes was convicted for violating the Butler Act, which Volunteer State legislators had passed to prohibit the teaching of evolution.

During the debate over the Poole Bill, Ervin delivered the first of many speeches he made over the years in favor of civil liberties and against Poole’s proposed legislation. This speech was the first taste of the home-spun humor Sam used to great effect throughout his career. He noted that it would “gratify the monkeys to know that they are absolved from all responsibility for the conduct of the human race” as he dismantled arguments to ban the teaching of evolution in the state’s public schools. The bill went down to defeat by a vote of 67-46 even as Scopes was convicted of violating Tennessee law. Poole made a second attempt to garner a ban on teaching evolution in the 1927 General Assembly, but his bill never made it out of committee. The debate was finished in North Carolina.

The Censure of Senator Joseph McCarthy 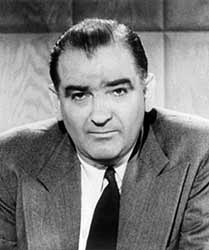 In 1950, Wisconsin Senator Joseph McCarthy began issuing allegations that government and military officials were known communists and he began holding a series of hearings to expose them. While he never revealed the famous list of people he claimed were communists who worked for the U.S. State Department, the hearings he chaired through the Senate Permanent Subcommittee on Investigations ruined the careers of many while the methods by which he conducted the hearings brought ridicule and calls for his ouster.

In 1954, Sam Ervin was chosen to fill the seat of Senator Clyde Hoey, who died in office. He arrived in Washington at the height of the McCarthy fiasco and was appointed by then Vice-President Richard Nixon to a committee that was to determine if he should be censured by the U.S. Senate. The so-called Watkins Committee, chaired by Utah Senator Arthur Watkins, was made up of Senators Frank Carlson (Kansas), Francis Case (South Dakota), Edwin C. Johnson (Colorado), John Stennis (Mississippi) and Ervin. In a bit of irony, Nixon chose Ervin and the other senators for the committee because they “played by the rule, had the respect of other Senators, were neither liberal nor media hounds, and were not presidential contenders” (A Conspiracy So Immense: The World of Joe McCarthy by David M. Oshinsky, pp. 470-477).

The committee investigated 46 charges included in a resolution by Vermont Senator Ralph Flanders against McCarthy that called for his censure, finding cause for two of them which were both approved by the Senate on December 2, 1954. Ervin delivered a speech concerning the committee’s findings as part of the process of censure in the Senate.

McCarthy continued as a Senator but his career as a politician was effectively over. He died in office on May 2, 1957, and the era of McCarthyism was brought to a close. 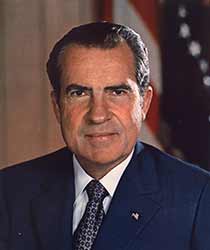 Watergate. This single word evokes memories of lying, executive privilege, and intrigue for those alive during the events surrounding the scandal that brought down an American President. The name has become synonymous with wrongdoing, and the -gate suffix has become an icon for any scandal involving government or business and industry.  This signature event for Sam Ervin’s career came in 1973 when he chaired the Senate Select Committee to Investigate Campaign Practices, more popularly known as the Watergate Committee.

The Watergate scandal began with a break-in at the offices of the Democratic National Committee which were located in the Watergate complex in Washington, D.C. Five men were arrested for the crime, and they were later connected with the Committee for the Re-Election of the President, the campaign organization for then-President Richard Nixon. On February 7, 1973, the U.S. Senate voted 77-0 to appoint a committee to investigate potential wrongdoing by the President. Ervin was named chair of the bi-partisian committee, which began hearings on May 17th. 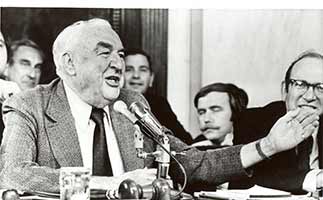 As the investigation into the break-in progressed, a trail of cover-ups and violations of the law were uncovered by Ervin’s committee, special prosecutors, and media outlets, culminating with the U.S. Supreme Court forcing President Nixon to hand over tape recordings he made of meetings in the White House’s Oval Office and other presidential offices. These tapes helped implicate Nixon as having a role in the cover-up of the break-in. This evidence, combined with testimony before Ervin’s committee  by Nixon administration officials (in particular John Dean), helped to start the impeachment of the President by the U.S. House of Representatives on February 6, 1974. If impeached, Nixon would be tried by the Senate for crimes outlined in the Articles of Impeachment and most-likely removed from office. In early August, congressional leaders met with Nixon and shared their opinions that he did not have enough support to avoid impeachment. Nixon ended the Congressional process to impeach him by resigning the Presidency on August 9, 1974. Ervin resigned his Senate seat and returned to Morganton, practicing law, writing several books, and making personal appearances until his death on April, 10, 1985.